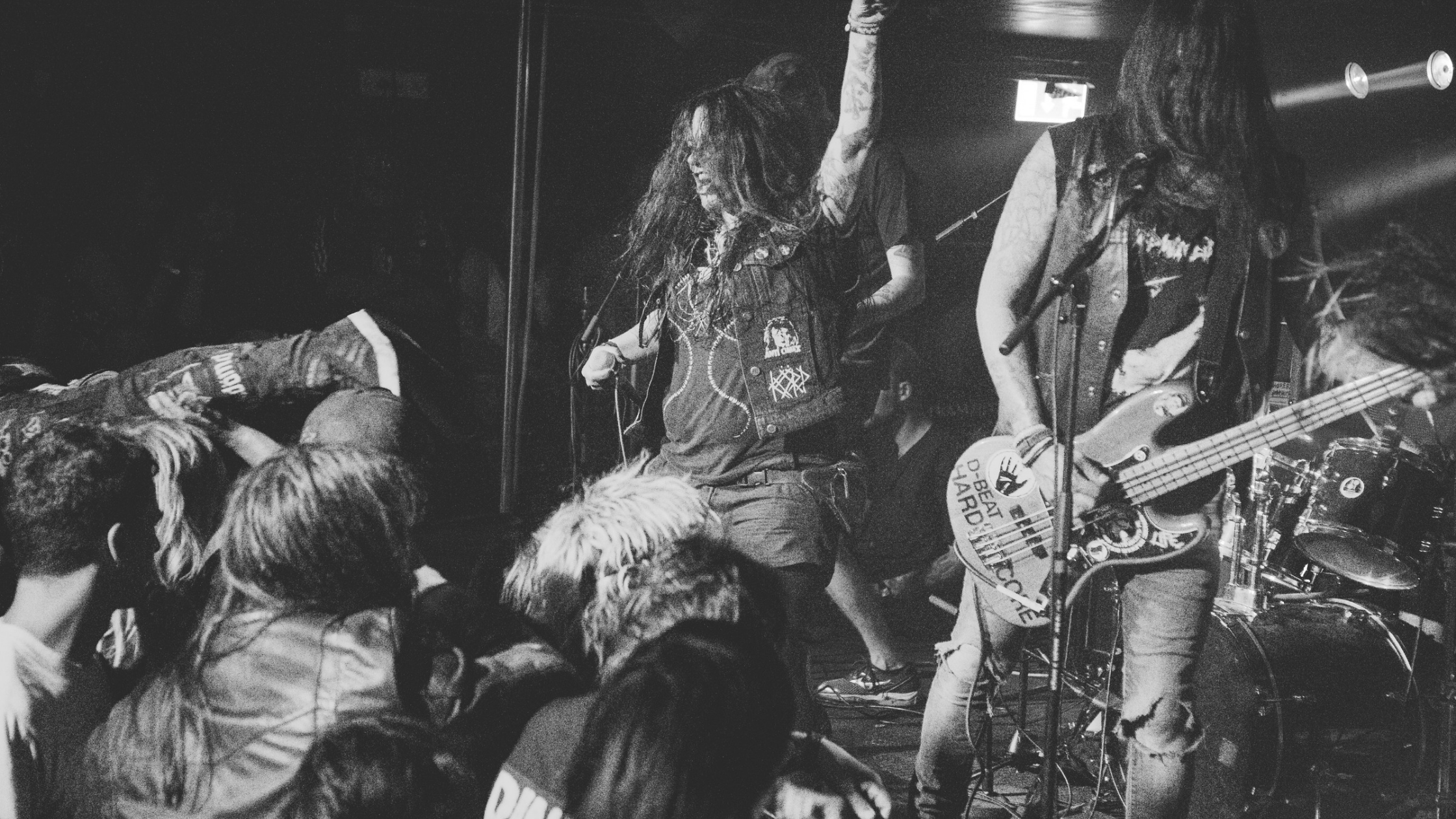 In the past few days I had the chance to send some questions to Misantropic, authors of the wonderful Catharsis, one of the best crust-core records of 2020 and without a doubt one of the best listened in recent years. Matte and Gerda answered my questions about the hardcore scene, punk as a threat, feminism, revolution in Rojava and much more and I want to thank them again with all my heart. No retrat, no surrender, making punk a threat again!

LET’S START WITH THE OBVIOUS QUESTIONS. CAN YOU GIVE US SOME BIOGRAPHICAL NOTES ON THE BAND? HOW DID YOU CHOOSE THE NAME “MISANTROPIC”?

We started playing around 12 years ago, with a slightly different lineup. The members basically came from three local bands: LESRA, HELLMASKER and PERSONKRETS 3:1, and we had an idea to play bit darker and more stench/death influenced stuff than we had done in our previous groups. After the first EP (the split EP with DEATHRACE) vocalist Johannes left the band and Gerda took the mic. We also changed our sound a bit at that time I guess, writing a bit faster and thrashier stuff. “Insomnia” was released in 2011 and a split LP with EATEN RAW was released in 2014. In 2020 we released a one-sided flexi 7” and a LP/tape called “Catharsis”. About the band name… well, I honestly don’t remember. But it is miss-spelled on purpose. There are too many metal bands around called “Misanthropic”.

A FEW MONTHS AGO YOU FINALLY RELEASED YOUR NEW ALBUM ENTITLED “CATHARSIS”. UNDER WHAT CIRCUMSTANCES WAS THE RECORD BORN? DOES THE TITLE HAVE ANY PRECISE MEANING FOR THE HISTORY OF THE BAND?

Yes. “Catharsis” can be translated to “purification”, “cleansing” or “clarification” and the title track kind of sums up the past few years for us a band. Health issues, and life in general, made it pretty much uphill for us as a collective for some time. But things turned around and we were able to get our shit back together. The result is this album. It took us a long time to record, and I guess “Catharsis” is a bit more metal and experimental than the previous releases, but it still sounds like Misantropic. The album has gotten positive feedback, but its still a bit sad that it was released during this epidemic since it means we cant play any shows. Fucking bummer. IN MY OPINION YOU ARE ONE OF THE BEST BANDS IN THE SWEDISH MODERN HARDCORE/CRUST SCENE. WHAT CAN YOU TELL US ABOUT THIS SCENE? WHAT DOES IT MEAN FOR MISANTROPIC TO BE PART OF IT?

Thank you! Well, Sweden has a small population and I guess most bands know each other in one way or another. Many of the “classic” Swedish bands keep doing their thing, but there are also lots of new bands coming out of Sweden these past few years’ worth checking out. REMISO, SOCIALSTYRELSEN, SKROT, ZYFILIS, WARCHILD, GEFYR, ETT DÖDENS MASKINERI and ANTI METAFOR to name a few.

But there is a pretty big difference between northern and southern Sweden. We live in the north, and our scene is a bit cut off from the rest of the country. Only about 10% of the Swedish population lives in this northern half. The vast majority of swedes lives in the southern part, which makes us northeners a bit isolated. If we want to play in “proper” Sweden there is usually a 10 hour car ride to that first gig hahaha. Not many foreign bands tour here so it is a bit boring sometimes. But our local scene in Umeå is great, at least before covid 19 came, and I would say it is pretty much the same amount of people attending a hardcore punk gig in Umeå as it is in the bigger cities down south.

MY POLITICAL POSITION ABOUT HARDCORE MUSIC CAN BE SUMMARISED AS “MAKING PUNK A THREAT AGAIN”. WHAT DO YOU THINK ABOUT IT? WHAT DO PUNK AND HARDCORE MUSIC MEAN TO YOU? WHAT MESSAGES DO YOU WANT TO CONVEY WITH YOUR MUSIC?

Ah, yeah I totally share that Profane Existence-motto. Misantropic is a political band and all our lyrics is about politics in one way or another; anti sexism, anti fascism, anti capitalism, animal rights issues, environmental issues… stuff like that. I think it’s a bit lame to see that so many punk/hardcore bands these days have stopped talking about politics on stage. It’s just “Ok thanks, here´s another song from our new album” and that’s it. If you have a mic, you should use it to speak up. You don’t have to go full on CRASS, but at least say SOMETHING.

DO YOU CALL YOUSELVES A POLITICALLY ANARCHIST BAND? IF YES, WHY AND WHAT DOES IT MEAN ANARCHY FOR YOU?

No. I would say that politically we all identify ourselves as “leftists” but we don’t always agree on everything all the time. There can be political arguments within the bad as well. And that’s a good thing, because it means that we are not a sect. I have spent a lot of time in the anarchist/activist environment while others in the band have other backgrounds (trade unions, solidarity groups, ABC etc). Erik is working his ass off as a local union representative for example, while I put my time on stuff like international campaigns, demos etc. Different methods, common goal I guess.

Anarchism to me is basically about freedom, in all aspects of life. When I was a kid I started reading stuff from AFA and The Swedish Anarcho-Syndicalist Youth Federation, which got me into reading more about anarchism. In my late teens I got involved in the syndicalist trade union SAC. 20+ years later, I am still trying to figure out exactly what anarchism actually means hahaha. But I guess Goldman said it in a good way: “Anarchism stands for the liberation of the human mind from the dominion of religion, and liberation of the human body from the coercion of property; liberation from the shackles and restraint of government. It stands for a social order based on the free grouping of individuals”.

IN A TRACK LIKE “DEATH CULT” YOU TALK ABOUT THE ROJAVA REVOLUTION. WHAT ARE YOUR VIEWS ON DEMOCRATIC CONFEDERALISM AND THE FEMINIST AND ECOLOGICAL PROCESSESS THAT PERMEATE THIS REVOLUTION?

Sure, I try to read up on jineology and Öcalan’s philosophy of democratic confederalism but to be honest our support for YPJ/YPG is pretty much based on what we see on the news and read in the press: brave men and women unleashing hell on patriarchy and religious tyranny. And that’s good enough for us.

RELATED TO THE PREVIOUS QUESTION, WHAT IS YOUR RELATIONSHIP WITH THE PUNKS FOR ROJAVA PROJECT AND WITH BANDS LIKE ADRESTIA AND MARTYRDÖD ACTIVE IN THIS PROJECT?

Punks For Rojava is a network consisting of people from the punk community worldwide, and I guess that makes us a part of this network as well since we have made a few solidarity releases for Rojava (like the digital version of the Death Cult single for example). But we don’t really know the people behind the network. We bump into members in Martyrdöd from time to time I guess, and Adrestia is a great band but I don’t think we have met or played together….

HOW IMPORTANT TO YOUR VISION OF PUNK AND HARDCORE MUSIC ARE SOLIDARITY AND SUPPORT FOR PROTEST MOVEMENTS LIKE BLM, INSURRECTIONARY MOMENTS AND RIOTS CARRIED OUT BY OPPRESSED SUBJECTIVITIES AND COMMUNITIES AROUND THE WORLD?

Hm, Im not sure I understand the question. Yes, we support many protest movements and insurrectionary movements but in the end it comes down to the actual political goal. The Trumpists in the US probably called their storming of the Capitolium a “revolutionary protest” as well, you know? Personally, I think the situation in Russia and Belarus is something worth following and showing support with right now. Same goes for the women fighting for their abortion in Poland.

ANOTHER TRACK THAT I REALLY ENJOYED IS DEFINITELY “ARM YOUR DAUGHTERS”, WHICH IN MY REVIEW I DEFINED “A STICK OF FEMINIST RAGE”. WOUKD YOU LIKE TO ELABORATE ON THE FEMINIST THEME ADRESSED IN THIS SONG? HOW DO YOU THINK PATRIARCHAL, MACHISMO AND GENERAL RAPE CULTURE DYNAMICS CAN BE ADRESSED AND FOUGHT, OUTSIDE AND INSIDE THE PUNK SCENE?

“Arm your daughters” is written by Gerda so she should answer this. Here is her reply:

I wrote this song a long time ago and as I recall it, I wrote it in rage after reading in the news about another murder of an innocent woman. Unfortunately, I have no real answer on what needs to be done to stop men’s violence on women, children and LGBTQI people. Many processes around gender equality moves forward so damn slow; time and time again, new research shows how men (also young men!) see feminism and women’s rights as less and less important. Sometimes you just want revenge, and if we who are oppressed by the patriarchy would start arming ourselves as a last resort to avoid being murdered and raped, I´m all in! That’s pretty much what to song is about.

WHAT DOES “NO RETREAT NO SURRENDER” MEAN TO YOU? THESE WORDS SEEM TO PERFECTLY REPRESENT THE ATTITUDE OF MISANTROPIC TO MY EYES.

Well, that’s the chorus of the track with the same title. The song is about war mongers sending people off to die in meaningless wars, so it´s not about us as a band. But sure, why not? Never give up.

PUNK IS NOT JUST MUSIC AND I THINK WE AGREE ON THAT. BUT AT THIS POINT OF THE INTERVIEW I HAVE TO ASK YOU ONE QUESTION. WHICH ARE THE BANDS THAT HAVE INFLUENCED YOUR SOUND?

We all have pretty different backgrounds musically. Some of us come from the hardcore/punk scene and some of us come from the metal scene, so this is a really hard question for me to answer. But there are a few bands that I guess we all can agree on, like ANTICIMEX, TRAGEDY, CONSUME, BOLT THROWER, SLAYER, HELLSHOCK, SEPULTURA, METALLICA, ENTOMBED… Everyone contributes with their thing, so its hard to name a specific band.

Personally, I´m a sucker for old UK crust and anarcho punk and I guess bands like ANTISECT, DISCHARGE, AXEGRINDER, CONFLICT and SACRILEGE have influenced me a lot. I also enjoy primitive death/thrash like ONSLAUGHT, DEATH, CANCER and stuff like that, so I probably steal some stuff from there as well when I write riffs for Misantropic.

THE INTERVIEW HAS COME TO AN END, ARE YOU ALREADY THINKING ABOUTE CONCERTS OR WORKING ON NEW SONGS/ALBUM? Do you think there are chances to organize a Misantropic concert in Italy in the next months?

We have actually been writing a lot of new material these past few months, so another album is definitely on its way. But it will probably not be finished until 2022 or something like that. Misantropic works very slowly. At the moment we don’t rehearse or get together at all, due to covid 19. Regarding a concert in Italy, I very much doubt it. This covid shit will probably not be over for another couple of months and I guess travelling abroad will still be a bit problematic a while after that. My guess is that we won’t play much live at all this year, not even in Sweden. We rarely do tours (too many kids and stuff) but if you have a budget to fly us in – get in touch.

THIS END SPACE IS YOURS, YOU CAN SAY AND REPORT ANYTHING YOU WANT. THANK YOU AGAIN FOR THE TIME YOU HAVE TAKEN TO ANSWER NY QUESTIONS.

My brain is blank after a long day with a bunch of kids having a pizza party in our livingroom (my sons 10th birthday party) so I cant figure out anything smart to say. Thank you for the interest, hope we will be able to play in Italy some day. Stay punk. Much love. 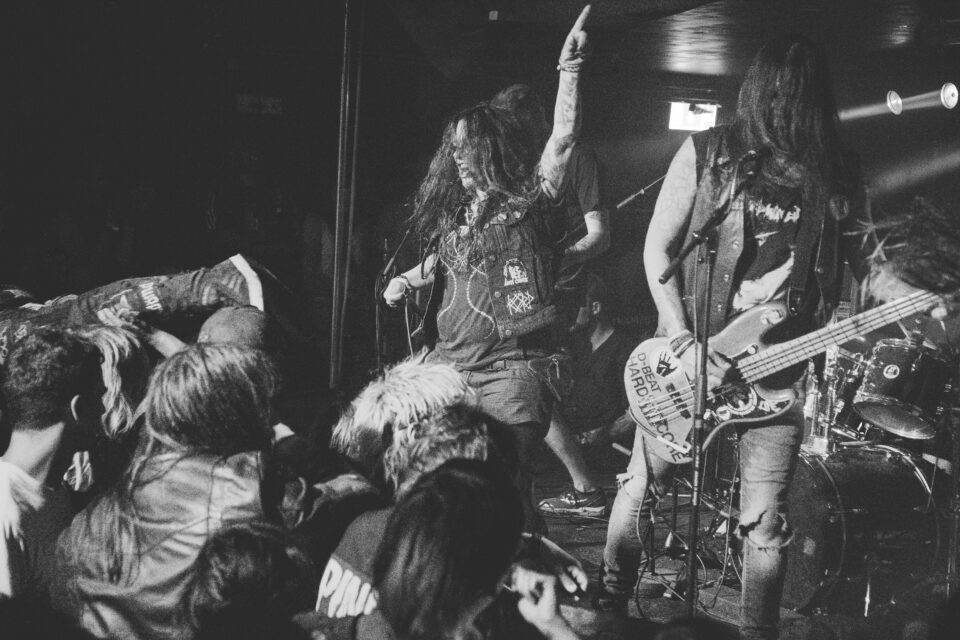