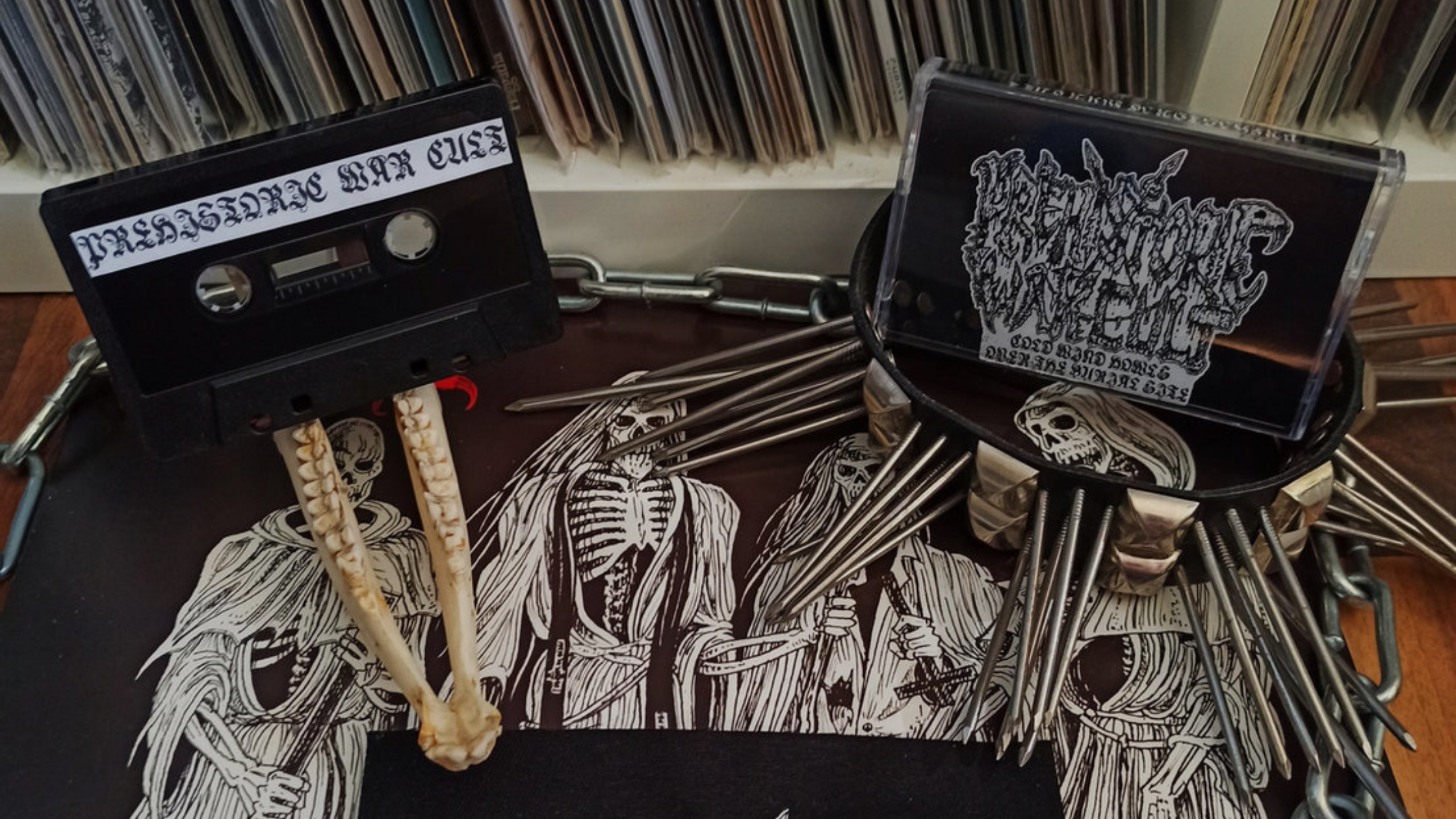 A couple of months ago I published a review of “Cold Wind Howls Over the Burial Site”, the first devastating studio effort of German band Prehistoric War Cult, a concentration of barbaric and brutal war metal without compromise and without pity, especially for the Nazi-fascist scum that infests the extreme metal scene and not only. Some time later I decided to interview them to talk about anti-fascism, their personal proposal of “War Metal” and especially their relationship with the extreme and punk/DIY scene. I leave you to the very interesting answers of Prehistoric War Cult.

Let the barbarians run wild. Let them sharpen their swords, let them wield their axes, let them strike mercilessly at the Nazi-fascist scum. Let savage war take the place of resignation, let primitive violence take the place of waiting, let the cult of prehistoric metal reign in the rubble of this world and of all forms of oppression. Let the barbarian hordes go on the assault to the cry of “Prehistoric Metal of Death”.

Let’s start as usual with the biographical notes: where, when and why were Prehistoric War Cult born?

We started the project in September 2020, after months of Covid-lockdowns, general depression and band inactivity. It took us about two months to write the songs on “Cold Wind Blows Over the Burial Site“, we recorded everything in January – mostly only two of us at a time, since regulations kept us from rehearsing again. As to the “why” – We really wanted to write and play more primitive, aggressive and bestial music than we did in our previous band.

What lies behind the choice of a name so fascinating and that leaves little room for doubt about the primitive ferocity of your musical proposal?

On the one hand, undeniably Conqueror had their influence on the name, as one might suspect. On the other, we wanted to have a certain theme, a background to all we do from the beginning. Historical – or even just “pseudo-historical” themes make it much easier to write both music and lyrics for us, so we settled on prehistoric rites, cults and barbarity as our “theme”. And there you go, the name pretty much came by itself.

Going more specifically inside your primitive and wild imaginary, what do you want to transmit with the label “Barbaric Metal of Death” with which you define your music?

We try to channel the spirit of the late 80s as well as possible – the 1st wave sound, where there was no Norwegian Black Metal (yet) and the boundaries between Black Metal, Death Metal and such were not yet there. Stuff like old Beherit, the Goatlord demos, Blasphemy of course – a sound that is more about primitivity, less about fancy PR stunts or camo shorts.

Listen to your first studio effort “Cold Wind Howls over the Burial Site”, you can hear equally echoes of the most putrescent and warlike death metal as well as atmospheres of the most primordial and obscure black metal. Which are the bands that have most influenced your sound?

Beherit, Conqueror, Sadomator, Goatlord and Black Witchery, to name the most important influences. The early bands and all those who celebrate their style!

At first glance your music, your imagery and the choice of terms such as “barbaric”, “war cult” or “prehistoric” brings you very close to the so-called “War Metal”. Do you think it is a label that fits your music? Do you identify with the war metal scene or are there elements and dynamics of that musical environment with which you find yourself in conflict or distant?

We are absolutely fine with the term “War Metal” – it describes what our music is about very well!As far as the “scene” thing goes, that’s another story… Around here in Germany, there is hardly anything like a “War Metal scene”. There are a few bands here and there, but barely any shows – and if there are, you will most likely find at least one fascist or “grey area” band on the lineup. What many perceive as a War Metal scene nowadays seems to be an internet phenomenon in the first place. To answer your question, we don’t really care about any elitist war/black metal scene bullshit. The only scene where we truly feel welcome and at home is the Punk / Squat/ DIY scene.

Continuing to talk about war metal, it’s well known that in this field as well as in the rest of the extreme metal scene you often find yourself in front of bands that have links with the extreme right or that are ambiguous about their political positions. On the contrary, you are a band that does not hide its anti-fascism. What does it mean for you to emphasize that you are an anti-fascist band? But above all, how is your anti-fascism declined within the dynamics of a scene, that of extreme metal, often full of tolerance and ambiguity towards Nazi-fascism or other forms of oppression such as racism or homophobia?

We have spent years playing and organizing shows in the diy punk scene. Standing openly against fascists was never a question for us. As such, we do not compromise when it comes to playing shows. The “scene” as such, if such a thing even exists, is secondary. Fascist assholes will be assholes and we won’t cooperate with them, no matter what music they play or like. Looking at the extreme metal scene in total and how rarely bands speak out openly against racism and homophobia, it makes it even more important for us to emphasize our political position.

Going back to talking about “Cold Wind Howls Over the Burial Site” instead, what were you inspired by when writing the lyrics and what are you trying to address with them? Is the prehistory recalled in your name just a choice of style or does this theme have a recurrence or a certain centrality in your lyrics?

Our lyrics revolve around vague themes that cannot really be traced to a certain point in time or any events. Instead they much rather focus on the unknown, the mystical and the barbaric past and what may have transpired there. About ancient cults, pagan worship and human sacrifices – it is not about just replicating historic events, but rather about telling stories from times far beyond our grasp.

Instead, one of your splits together with θoʊθ has recently been released. How did the collaboration with this band come about and what were the reasons that convinced you to share a split with them?

θoʊθ is a 1-person project and that one person happens to be a friend of ours. The music itself is quite different to the usual Death Metal many contemporary bands are making and they have a historical theme as well so… it just happened. Also, releasing the demo on vinyl as a split made it a bit easier for Fucking Kill records, since nobody knew how well our music would be received prior to the release.

Are you already working on a new chapter of your “Barbaric Metal of Death”? If yes, will it follow the lyrical and musical coordinates of the first album or do you plan to expand your interpretation of bestial black/death metal?

The next release will definitely follow in the vein of the last release. We are currently working on it and already have a few songs more or less finished. The lyrics deviate a little from those on “Cold Wind…”: They focus even more on prehistoric cults, acts of torture and sacrifice and ecstatic fever dreams.. a bit less “direct” I guess. As far as the music goes, expect a few more barbaric tunes without too much innovation and lots of blastbeats!

The interview has come to an end, I thank you very much and I leave this space all for you to say whatever you want or think is interesting! Long live Barbaric Metal of Death!

Thank you very much for your questions!
To close it off we would like to tell you our wish for the future: The world needs more explicitly antifastic metal bands that are neither fueled by their desire to be “memeable” nor bands that default to playing sophisticated prog metal or “post”-something.More serious antifascist barbaric metal, less “ironic” hipster crap!