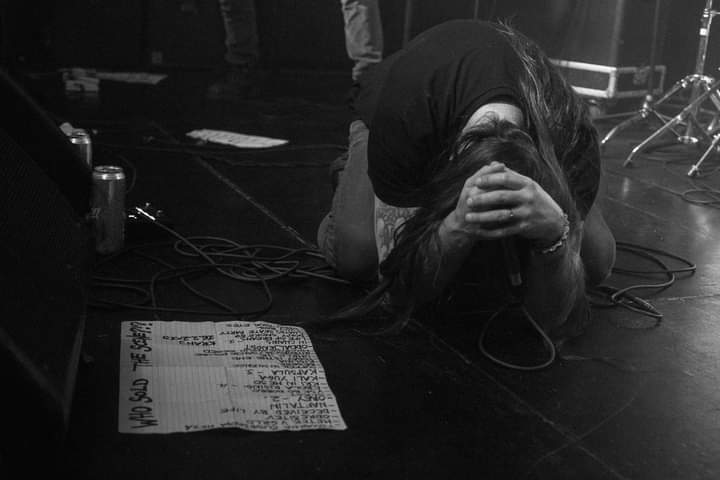 In May 2019 some dear friends of mine organized a gig to one of the historical names of the early European grindcore scene, in SOS Fornace, an important social center in Rho in the paranoid province of Milan. That band is Extreme Smoke 57, one of the first incarnations of extreme music (or noise) active since the 90s and still to this day one of the bands to carry on the idea that grindcore is not business but protest!
A few days ago I was lucky enough to have a chat with Boco, singer of the band, and I decided to interview him to talk about the differences between the grindcore scene of the 90s and the current one, the protest and political nature of this music genre, the clear stance against porno-grind and messages it conveys, and in general about the commercial trends that exist within the scene nowadays.
I leave you with his words, with a fundamental and still relevant question: who sold the scene?

The campain for musical destruction still continues. GRIND IS PROTEST, NOT BUSINESS!

Hi Boco/Extreme Smoke 57! You are a historical name in the European grindcore scene, active since 1990. What did it mean to play such an extreme genre in those years and to be the first band to play it in your country?

Hello and thanks for your words. Well, when we started doing noise we didn’t think at all what it would become later. We were just young kids making fun and jokes of everything. Of course we were radical in a sense of hateing the commercial musical crap and sure we were much influenced by other noise and grind core bands we used to listen. You have to know that when we started there was still Yugoslavia and there were some other bands to play this kind of music in other Yugoslavian republics, but for sure we were the first one to came out of Slovenia. But we didn’t give much attention about it in the time.

Being an extreme evolution of hardcore punk, grindcore was born by its nature as a political genre, of protest, resistance and denunciation. What does playing grindcore mean to you? What do you think could be the “political” potential of such an extreme genre even today in 2022?

Well, I think grindcore came as an natural evolution from hard core and extreme metal scene, being bored by playing usual stereotypes of riffs. Someone got an idea to start playing the shit faster, harder and shorter. Why not? Even in begining of 80’s there were bands such as Sekunda or Larm to play the stuff really fast, but there were no specific name for this kind of genere untill (again) someone got the name for it. And so the genere accidentlly got it’s name, which is cool, I think. As an answer to your question about being political and protestive I guess this message existed even before when this genere started, be it in metal or in hardcore/ punk.

What was the Slovenian hardcore, punk and DIY scene like when Extreme Smoke 57 formed and started playing music? Which were the most interesting realities (squats, collectives, bands) at that time and which realities are among the most active and valid today in the Slovenian scene?

In 1990 when we got together the real hardcore scene, which was much active in the 80’s were already slowly falling appart. All the old bands splitted up and there were just a few cool bands around. At least in Slovenia. Even the old alternative collectives started to bacome more commercial by organising concerts of more bigger names and the pointing message started to lose it’s real meaning. Well, maybe i was born too late, but i still remember the undrground scene from the 80’s which was really crazy and violent. As for now…what can I say? It is sure much more different than 30 years ago, we live in other time. There are still some cool collectives who organise good gigs, expecially in Ljubljana, but in other smaller cities the scene is also good. The only thing that makes me questionable is why there are people who only stand in the scene for few years and then disappear? Is a waste of time and all the effort. Well I do understand the people are growing up, makeing families etc, but still…why do they quit and lose interest in the scene? I know much people who have kids, jobs etc and are still active in the scene. Not so much in Slovenia, but in other places all around. In anyway is not my problem, so i don’t care really anymore. For me is just important that the bands goes on and do gigs and releasing the music.

You guys have been around for 22 years. What are the biggest differences you’ve been able to notice within the grindcore scene and in the approach to this genre over the years? What are the positive and negative aspects of the scene compared to the 90’s? And What does a title like “Who sold the scene” from an 1996 Ep refer to?

The title ’’Who sold the scene?!?’’ stands to our point of view to the scene back then when everything already started to sell out. So we took this title as a radical answer against the commercialism in the scene.

What were the bands that initially influenced your music? And what are the bands from the first wave of grindcore that you had the best friendships and support with?

You had to know the line up was differt than now. We were much influenced by Sore Throat, Napalm Death, Patareni/ Buka, 7 Minutes of Nausea, Fear of God, Siege, Doom, E.N.T., Crawl Noise, Larm, Cadaver Corpse, Agathocles, Carcass, Anal Cunt etc. In fact the international grind/noise scene was very large and connected together through fanzines, tape trading and writing letters. We were all pan – pals and supportive to each other. It was a good time that will never came back and i still keep all the letters from all the folx i used to exchange the ideas and music with.

The idea of this interview comes mainly from the fact that you played in my city (Rho) in 2019 in a concert organized by some friends and that I remember as devastating! What memories do you have of that date in the province of Milan? Would you like to tell us about that experience according to your point of view?

It was a good place to do a gig and we were already at the end of our. tour, so maybe we were a bit tired, but i do remember we give everything to do a good show. Also the rest of the bands were OK and the crowd was cool too.

Have there been and what has been the relationship between the hardcore/punk/grindcore scene and antagonist movements (anarchist and otherwise) in Slovenia from 1990 to the present? Which have been the most important Slovenian bands also from the point of view of political militancy and activism?

We were never a political band and we don’t use any political messages in our lyrics, therefore i can not answer to this question. We try to avoid politics and such themes. We just try to survive as everyone else do. Our lyrics talk about personal views of life and death. In fact some of them are political in a way, but in metamorphosis. In our personal life, yes of course we talk about politics, but we don’t use it in our music. Drinks first, politics later heh.

In 2020 you released your latest record “Stage V: Salvation”. Are you working on anything new? Are you planning any records, Ep, split in the near future? Most importantly, will you resume with gigs and tour?

True. We become lazy with the releases in the last time which is a shame. There are no real plans what we gonna do or release in the future. We have some new songs which are still in the makeing and lots of ideas of creating new once, but we want to take our time and do them right, which takes time. As for this summer we only have 4 gigs confirmed in Slovenia. I try to make a new tour in august in Germany, but it seems like no one is interested in happening and help with oraganisation. Perhaps i should change the ruote and ask somewhere else. For now is the only chance to tour with the band in the summer time. I can’t choose any other time then the summer because of my job. And it looks like we are not interesting band enough to call us for any festival or whatever, so fuck them all! We will continue in our way, create new music and live our life

We made it to the end of this interview. This space is at your complete disposal my dear Extreme Smoke 57, you can write and add anything else that comes to your mind and that you think could be interesting! A big hug, GRIND IS PROTEST!

Nothing special, but use your mind in live your life. Don’t get fooled by politics and false idiots in the ’’scene’’. In fact i question everyone again – WHO SOLD THE SCENE?!? Thanx for oportunity with this interview. Cheers!